…well, and a pituitary gland.

First things first.  I’m not a Physician, and no part of this article should be taken as medical advice.  This is just me sharing my experiences. This information is purely anecdotal.

On with the story.

I had always had a feeling that I had low testosterone, even as a teenager.  I didn’t have a clue what to call it at the time, but I was pretty aware of the fact that I didn’t think or behave quite like the other males that were around my age.  I was never very competitive or driven, I had a very hard time building strength or muscle, was never able to lose body fat, and I didn’t have the same interest in girls as most of my friends did.  Of course, girls had my attention, but there was just as much “eh” as there was interest. This went on well into adulthood.

After I turned 30, I decided that I wasn’t interested in living the next 30 years the way I had lived the first.  Not that they were bad, but I knew that things could be better. I wanted to try to experience a life lived with purpose, direction, and drive.  I worked (and am still working) for several years on inching my way towards a better overall state of health. I weighed well over 300 pounds and had developed a 2 pack a day smoking habit.  Not good. I started by reading lots of magazines, trying to pick better foods to eat, and exercising. It all helped, and I’ve slowly ramped up those things to much higher levels than I thought possible several years ago.

One of the things that has made massive improvements in my mood regulation, drive, general interest in activity, muscle growth, fat loss, recovery from exertion, libido, and sleep quality has been Testosterone Replacement Therapy, or TRT.  I had read quite a bit about low testosterone and what that looked like, so I talked myself into going to a Doctor to ask about TRT.

This turned out to be more of a challenge than I thought it would be.

The first Doctor I went to dismissed my concerns and said that if I’d just lose 50 pounds, I’d feel better and wouldn’t need that stuff.   I explained to him that I had been trying that for a few years now and not been very successful at all. So he wrote out a prescription for Adipex and said that should take care of it.  I trusted him, and gave it a shot. I lost some weight, but I didn’t have any other quality of life improvements, and as soon as the prescription ran out the weight came right back. Turns out, amphetamines aren’t a sustainable source for long-term health optimization.

I did some asking around and found another Doctor who was a big proponent of TRT.  Sweet, right? Nope, he wasn’t taking any new patients at the time, but his partner was.  So I went to see her. She did some lab work, and the results showed that even after the previous years of improved diet and exercise, I had the testosterone levels of a woman.  Awesome. Thankfully, she decided to help me get that straightened out through testosterone injections. She was super conservative in her dosing. So much so, that people that I trusted to bounce my situation off of said that I was nearly wasting my time.  It took her over 2 years and having blood drawn every 6 months and making small, incremental increases to get my dosage to a level that made me feel really good. Not Superman good or anything, but when I woke up in the morning, I was ready to get the day started.  Not like previously where I’d needed an hour every morning to decide to get moving. I finally started to feel good and make some really positive changes…and then she wanted to do more lab work to see if she could reduce my dose.  I was not a happy camper. Couple that with my waiting 4 hours in her office to have my blood drawn, and I just went and cancelled everything with her office. (Note: I would have never done that before testosterone. I would have just done whatever I was told without question.)  Off to find a new Doctor.

I decided this time to try one of those one-stop-medical-shops, where they had Urgent Care, Family Practice, Chiropractic, and a few other services.  My assumption was that maybe between the group of medical professionals in the building, at least one of them would keep me on the right track. Wrong.  I made an appointment to see an MD, but when I got there was told that I’d be seeing a Nurse Practitioner. Nurse Practitioners have a place in the medical puzzle, but I’m of the opinion that specialty care (endocrine disorders in this case), isn’t one of them.  Guess what? My opinion was proved, once again, that it wasn’t unfounded. After my explaining my situation, in great detail, to this NP she said that she wanted to do more lab work to see about maybe getting me off TRT because maybe my body had started producing its own since it had a jump-start.  I got instantly irritated. I told the nice lady as politely as I could that she needed more education on these matters and that any case that she had worked regarding TRT should probably be reviewed, because that’s not how hypogonadism in males works…at all. (‘Nuther note: Wouldn’t have done that prior to TRT, either) I told her that I was in no way interested in decreasing my dosage, let alone stopping my treatment altogether.  I asked if I could be excused, paid my fee, and informed the receptionist that she could cancel any further appointments or orders that had been made. The search continues.

After some more web browsing on how to find the best Doctor to suit my needs, I stumbled across an interesting option. Anti-Aging Clinics.  I had never given them any consideration. Why would I? I was only 35 at the time. I needed testosterone, not Botox. What I found out after my first visit was an Anti-Aging Clinic was exactly what I needed.  This Doctor was awesome. After lab work, he had an aggressive plan. I’ve come to like aggressive. He said that all of the labs that were supposed to be high, he wanted at the top. All of the labs there were supposed to be low, he wanted at the bottom.  I like this guy. A little over two years later, and everything is running smoothly. He hasn’t asked me to continually redraw labs, which is cool, because they are pretty expensive. I’ve paid as much as $700…out of pocket. He says, if I feel good, he’s good with what we’re doing.

Testosterone has several different options for delivery, with the most popular being injections, then creams, and then implanted capsules.  Each of these methods has their pros and cons, but I’m going to talk about the injections, as that’s the only method that I have direct experience with.  For the first several years, I did an injection once a week into my thigh muscle of 1cc of testosterone with a 23 gauge, 1.5” long needle. I gotta be honest here.  Not once, was I ever excited about these injections. These could be flat painful. Especially if I hit a nerve or got close to a vein. I watched several videos and asked nurses if I was doing it right.  I was, and it sucked. I was whining to a friend of mine and he recommended that I look into subcutaneous (under this skin) injections vs intramuscular (what I was doing), and sent me an article discussing it.  I swapped to injections twice weekly of .5cc of testosterone with a 27 gauge needle that was .5” long into my belly fat. Pretty much painless! Also, the twice weekly injections help to cut down on the peaks and troughs between injections.  Testosterone doesn’t have a very long half-life, which is why you can’t just inject once a month.

When I stick to my treatment regimen (life happens, the post office “loses” your drugs, etc), I feel really good.  I have no plans to stop my TRT. Poking myself in the belly a couple times a week has been totally worth it. I even went as far as telling the previously mentioned NP that if she tried to stop my treatments, I would get them without her.  I didn’t want to have to start doing shady stuff, but it really does make that much of a difference for me.

So, if you’re a male, and any of the stuff I’ve described here matches what you’ve got going on, it might be worth it to visit your Doctor and have them check your testosterone levels.  I haven’t seen any information as to why, but most men suffer from low testosterone. It could make a huge difference in your life. Who doesn’t like to feel amazing every day?

Take care of yourself.

See the difference?  Kind of a big deal when you are stabbing yourself multiple times a week. 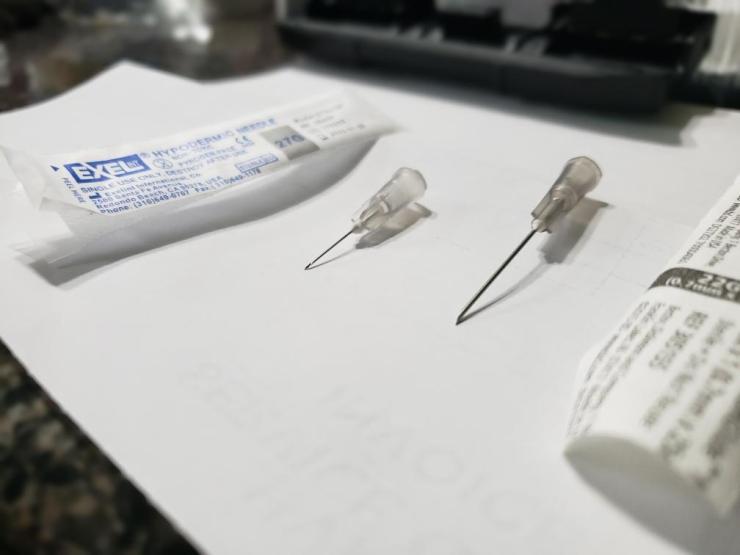