Once again, I’ve got an opinion.  I happen to be somewhat of an expert on my opinion.  The information that I pass on in my write-ups, I try to keep as close to first-hand experience as I can make them.  This is what’s worked for me.

I didn’t speak much on what we’d be shooting on our range trip in the first article, because up until this point, it hasn’t really mattered.  If we can’t get them excited about being there, we can shoot whatever “we” want, because the kids probably not going to touch anything.

But, let’s say you did get them all wound up about going shooting.  What should you have the kid shoot? Personally, I think a semi-automatic rifle with a red dot sight, chambered in .22lr is the ticket.  It makes enough noise that it’s cool without being jarring, it’s cheap to feed, and the semi-auto action and red dot simplify the experience.

I get it, and I agree.  BUT… let’s pretend you’re teaching them to write.  Do you start with cursive? Likely not. “Can” you start with cursive?  Sure, but you’re in for a frustrating ride, for both of you. Let’s get them a little closer to coloring inside the lines, and then move on to cursive later.  I pick a dot sight over a scope because the lack of a tube and the magnification of a scope gets rid of paralax and eye-scope alignment issues.  Don’t know what those two things are?  Definitely steer clear of a scope. Keep it simple, at least for now.  Complicating things is easy.

There are several different rifles that you could use for our purposes here.  The more popular are the Ruger 10/22, The Marlin Model 60, and the more recent entry is the Smith and Wesson M&P 15-22.  None of these are a bad choice. If you already have one of these rifles, you’re ¾ of the way home. Slap a cheap red dot on top (I like the Bushnell TRS-25, around $50, pictured), zero it, and get after it.  You may need a “riser” to go with your dot, depending on which dot you get and your kids head size.  Putting the dot directly onto the rail puts the dot pretty low and the kid may have a hard time seeing the dot. 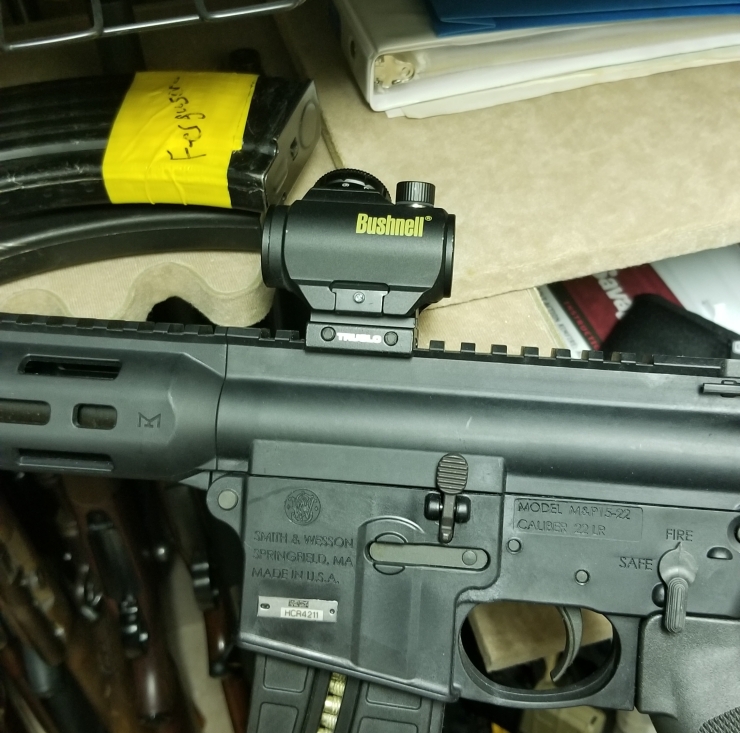 My personal choice was the M&P 15-22.  I went with this rifle for a few reasons.  One, I didn’t already own one, and I like buying new guns.  Just being honest. Two, it’s ergonomics mirror that of an AR15-patterned rifle.  So, as the kids get older and move to a center fire AR-pattern rifle, they’ll already be well aware of it’s controls.  Most notably, I prefer the safety lever arrangement of this rifle versus the cross-bolt style safety of the others. I don’t like brand new shooters poking their fingers around the trigger guard looking for buttons to press that take more force to engage than is required to trip the sear with the trigger.  Another reason for the 15-22 is that it comes with an adjustable stock. This is a big deal for comfort while shooting. Again, comfort = better experience. That also means that the gun can grow with the kid. As they get taller the stock can be adjusted to fit them just right, so the same gun can be used from childhood all the way through adulthood.  That adjustable stock also means that both you and the kid can share the same rifle, making “shooting games” more fun (later article). This is as much about interaction with your kid(s) as it is getting them shooting. Lastly, the 15-22 comes with a “flat-top” section of rail on the receiver that’s optics ready. Pick a dot or standard scope, mount or rings (if needed), and slap it on.  If you decide to go with the 15-22, pick up a 10 round magazine.  It makes shooting on a bench a whole lot easier, due to the shorter body of the magazine.

The gun you use definitely matters here.  If you strap them onto an intermediate caliber center fire rifle with a scope, and they end up needing stitches because they got hugged up too close to the scope bell, and you’re gonna have a hard time convincing them that shooting is fun.  Side note: If you hand any new shooter, kid or not, a 12 Gauge with 3.5” 00 Buckshot, you’re an asshole. Plain and simple. Don’t be an asshole. Pick something with light to no recoil, with a simple manual of arms, that is reasonably accurate, that is capable of a simple sighting system (dot or scope, but skip the bullet drop stuff), with a safety that’s easy to find, manipulate, and that’s preferably away from the trigger.

As is usual, I recommend that if you don’t have a rifle to fit your needs, ask someone if you can borrow one.  The chances that a person who would have one of these would be more than happy to see you taking your kids shooting are pretty high.  I can tell you, that if I were asked, not only would I let someone borrow the rife, but I’d send them off fully equipped.  Ammo and all.  Kids need this stuff. 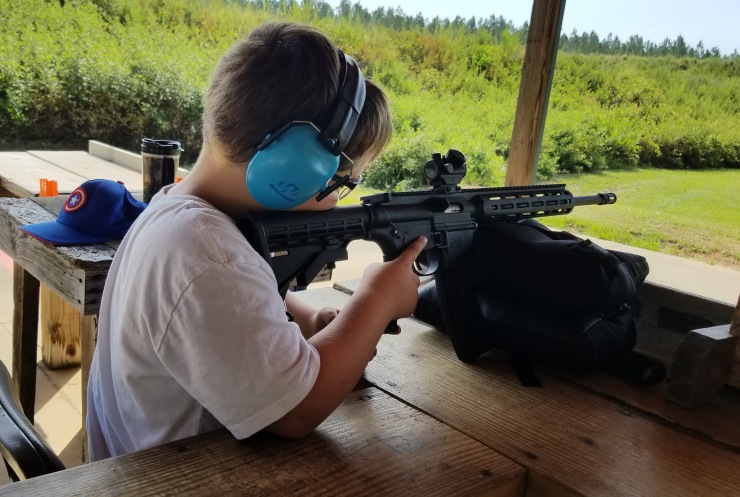 When the shooting is done, ice cream is mandatory.  Take care of yourself.