Probably one of Man’s earliest tools, after the stick and rock, was a rock with a sharp edge on it, and edged tools remain one of our most widely used tools today.  Chances are, if you’re capable of holding one, you’ve used a knife for something between spreading jelly to turning screws. Maybe all of the above and everything in between.

Want to hear a joke? England is working on banning knives. Roll that around and try not to give the UK some side-eye.  Yes, let’s ban the use of one of the oldest tools know to man.

We’ve talked about giving knives as gifts here before, so let’s touch on maintaining our slicing devices.

The anatomy of a knife is pretty simple, but we’re going to keep this talk focused on the business department, also known as the edge.

There are several different types of edge, or “grinds”.  The most common is going to be some variant of a flat grind.  Some of the reasons for the popularity of the flat grind are relative simplicity, durability, and cost of manufacture.  Simply put, a flat grind is two flat shaped opposing bevels of equal degree on the edge of the blade. The degree of the bevel used is dictated by the purpose of the blade. An ax will often have a bevel measuring somewhere in the high 30’s, while a high-end slicing knife’s edge geometry can measure into the single digits.  The trade-off is that the finer cutting edge is generally going to be more fragile than the ax. You can hack all day with an axe and do very little damage to the edge, unless you hit something you shouldn’t be hitting with it. Conversely, if you use a fine-edged knife on the wrong cutting board, you can do some pretty decent damage to it’s edge.  I cringe every time I hear a kitchen knife clacking down onto a glass cutting board. Stop doing that to your knives. Flat grinds are fast and easy to produce, which keeps manufacturing costs down.

If you want a flat grind, you’ll have to use some form of flat stone.  There are as many styles of sharpening stones as there are religions, and I’m not going to cover every one of them.  Most folks are familiar with the double sided whetstone that you can pick up at the hardware store. They make a fine paperweight.  If flat grinds are your thing, then you’ll be best served by a sharpening system that includes guide rods. The reason being is, every time you move the blade’s edge across the stone, if you’re not holding the blade at the exact same angle every time, you’re creating a series of micro bevels and it takes a ton of time to get them lined up just right to have a truly sharp edge.  A guided system cuts that out by keeping a consistent angle throughout the process by clamping the blade into the guide. This greatly reduces the time you have to spend getting a really nice edge. If you’ve never handled a knife that’s been sharpened by someone who knows what they’re doing, you probably have never felt a legitimately sharp knife. There is a difference, I promise.  Spend a few bucks and get a guided system if you plan to use flat ground edges. They start at about $25 and go waaaayyy up from there. Don’t spend over $50 for your first setup. You might not like sharpening knives at all, and it wouldn’t be fun to get stuck with a $300 fancy sharpening system.

Using the guided system is pretty easy.  Clamp the blade in the guide, work your way from the most aggressive stone (for initial sharpenings or damaged edges), to the finest sticking with even strokes and pressure for each side, and obviously the same degree marking.  That’s unless you’re setting up a double bevel, but that’s a whole ‘nuther conversation that we probably won’t have, because I don’t use them.

Another common grind is called the convex grind.  It’s just what it sounds like. Instead of two flat edges, there are two convex shaped edges.  This is my prefered edge grind. The convex grind isn’t as common as the flat grind, due mostly to the more lengthy and costly manufacturing process.  Producing a convex grind is done via a sanding belt, which is a consumable that requires regular replacement. That slows down the process, and time is money.  The convex edge seems to be a bit more resistant to rolling than the flat grind, which us usually what has happened when we think the knife is dull and needs to be sharpened (more on that in a bit).  I’ve even put convex edges onto my axes. They are *very* sharp.

If convex edges tickle your fancy, you’ll need a sharpening system that includes a sanding belt.  I’m sure you ingenious readers could come up with a dozen ways to set up a gritty strap that gets rolled around by some wheels, but there’s a company that has just what you need, already ready already.  You’ve probably walked past them, thought “what’s that?”, assumed it was just another gimmicky sharpener that granddad would frown about, and moved on down the aisle. That’s what I did, anyway. At least until I was sitting through a lecture on edges that was put on by Morgan Atwood of BFE Labs, and Ian Wendt of Special Circumstances (look them up, really), where we discussed…edges…for two hours.  Both of these fine men are known for creating some very cool cutting and poking tools. I asked Morgan about his preferred sharpening system and he said “Man, just get a Worksharp, and be done with it.” So I did, and haven’t looked back. 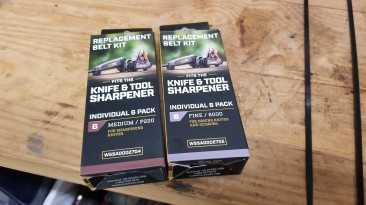 Using the Worksharp is pretty straightforward.  Turn it on, drag the blade through the guide at the desired angle, and repeat as necessary progressing through the different belt grits until you have a mirror polished and incredibly sharp edge.  It takes me well under 5 minutes to go from screwdriver dull to hair-popping sharp. I’ve sharpened other folks’ knives with the Worksharp and they have all been impressed at the ease, speed, and results.  Because the Worksharp is a power tool that removes material, and it does take a few minutes to develop a feel for, I would pick or buy a cheap knife to learn on. It will only take a few minutes, but don’t make yourself sad by learning on your expensive or heirloom kitchen knives.

My knife is dull, and needs to be sharpened.

…..maybe.  Probably not, but maybe.  Most knives, short of being damaged, need to be honed at about a 10:1 ratio to actually being sharpened.  For this, you’ll need a smooth honing steel.  Not ribbed, not ceramic, smooth.  What happens is, the edge of the edge gets folded over and the knife cuts poorly.  If you want to know if this is the case, drag the edge of your knife backwards across the edge of a glass plate or the corner of the sink, gently.  If you feel any catching or roughness, you just need to straighten the edge with the steel.  If it feels slick as glass and still won’t cut, time to sharpen.  If you don’t have a steel, the rounded corner of a steel sink will do.  Or the top edge of the window in your car.

Sharpening knives isn’t hard, but there are techniques to it.  As is commonly my opinion – If you don’t know how, ask someone who does.  The chances are that they’ll not only show you how, but will let you use their equipment.  Use this as an opportunity for frith building and bring a couple beers. Metal work always leads to dehydration, and nobody wants that.

Then, I’ve run across folks who don’t even bother with sharpening knives.  If the knife gets dull, they just throw it away and replace it. I don’t know how these people sleep at night.

Take care of yourself.